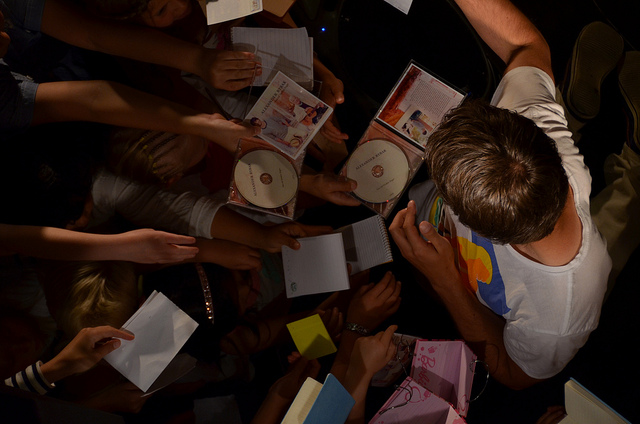 If you’re the acme of of your game (any Walt Whitman fans?), the next step might be to attend a trade show event, so that you can show potential clients what you have to offer when it comes to your industry. If you aren’t sure whether or not a trade show is for you, consider this exciting fact: during the Consumer Electronics Show (CES) this year, there were approximately 1.75 Tweets per second that were directly related to the show — those are some impressive numbers.

Do you know who the big shots or celebrities in your industry are? It might be a stretch to book some of these people if you are part of an industry that has some seriously famous people, but chances are there are other experts that you can easily hire. A good example is the tech industry.

You can find a lot of technical writers or people that have written eBooks on various topics for hire. Simply having one of these people at your trade show booth will draw people to your booth – an expert opinion is always one that people want to hear, and books tend to impress.

More often than not, people will remember the activity that goes on at your trade show booth, and not so much the paperwork or sales pitch that you create. If you think of a trade show like a circus, you can then imagine what would bring in all those visitors and spectators – a show. So, put on a show by bringing in the people that have authority in the eyes of others. Just make sure that your show isn’t so big it doesn’t make sense. You still have to have a goal in mind.

We’ve written about setting goals a lot on this blog, so make sure to take a look at some of our other marketing articles. But just to recap, it does make sense to have a solid plan in mind when it comes to formulating and obtaining your marketing goals before attending a trade show. This way, everyone that’s part of your trade show staff can be on the same page, and everyone can work towards the same basic goals.

In addition to having some kind of celebrity pull at your booth and setting clear goals, it’s also a really smart move to keep the size of the show in mind. A massive trade show space means that you will be competing with hundreds of other companies for space, and most of those companies will probably be setting up really big trade show displays. While there’s nothing wrong with trade show displays that take up entire blocks, sometimes bigger trade show displays are actually very intimidating.

Think of going in the opposite direction when it comes to your trade show displays. If everyone around you is operating on a large scale, you may want to consider setting up a smaller or mid-size booth. Sometimes, the one booth that looks different is the one that will draw the most attention, as counterintuitive as that may seem.

No matter what the physical size of your booth is, it’s always a good idea to create trade show displays that are eye-catching. This means incorporating elements like visual and technical items, adding things that are unique, and even doing something like changing the box-type structure of a regular booth into something that’s a lot more eye-catching. If you need help with any of these things, Blazer’s team can build the perfect exhibit booth for you and for your show needs.

We’re also happy to store your exhibit booth for you, and to ship it to the convention center. Let us know what you need, and we’ll get back to you quickly. In the meantime, research and create a list of possible industry celebrities that you can hire to attend the next show with you – you’d be surprised at how effective this tactic can be.